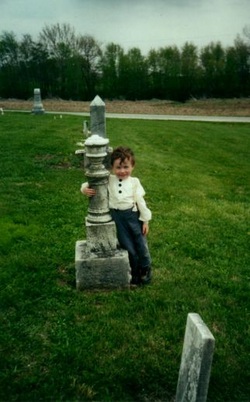 These are the stories of those buried in Wimmer Cemetery and of the community they shared.


The first marriage in the township was that of Gideon Vancil and Phoebe Wilson, March of 1820.  The ceremony was performed by Reverend James Sims, a local preacher of the Methodist Episcopal Church.  It was for many years supposed this was the first couple married in the county.
A daughter was born to the foregoing couple in 1821, and supposed to be the first birth in the township of Auburn.
The first death was that of Mrs. Elizabeth Walker, daughter of Samuel Vancil, who died in the fall of 1819, and was buried in what was then called the "Wimmer burying ground."  An incident occurred at the time of this death that exhibits one of the dangers that beset the early settlers.  While the friends were gathered around the dying bed, it was discovered that a prairie fire was rapidly approaching, propelled by a strong westerly wind.  The grass, seven or eight feet in height, was as dry as powder.  By the most vigorous exertions in keeping the end of the cabin near the fire, wet, the house was saved, but all the hay stocked for winter feeding, was destroyed.  In the midst of the excitement, the sick woman breathed her last.  (History of Sangamon County, Illinois:  Together with Sketches of Its Cities, Villages and Townships, Educational, Religious, Civil, Military, and Political History; Portraits of Prominent Persons, and Biographies of Representative Citizens.  Chicago: Inter-State Publishing Company, 1881, 749)

To read more of their stories, click the document below...